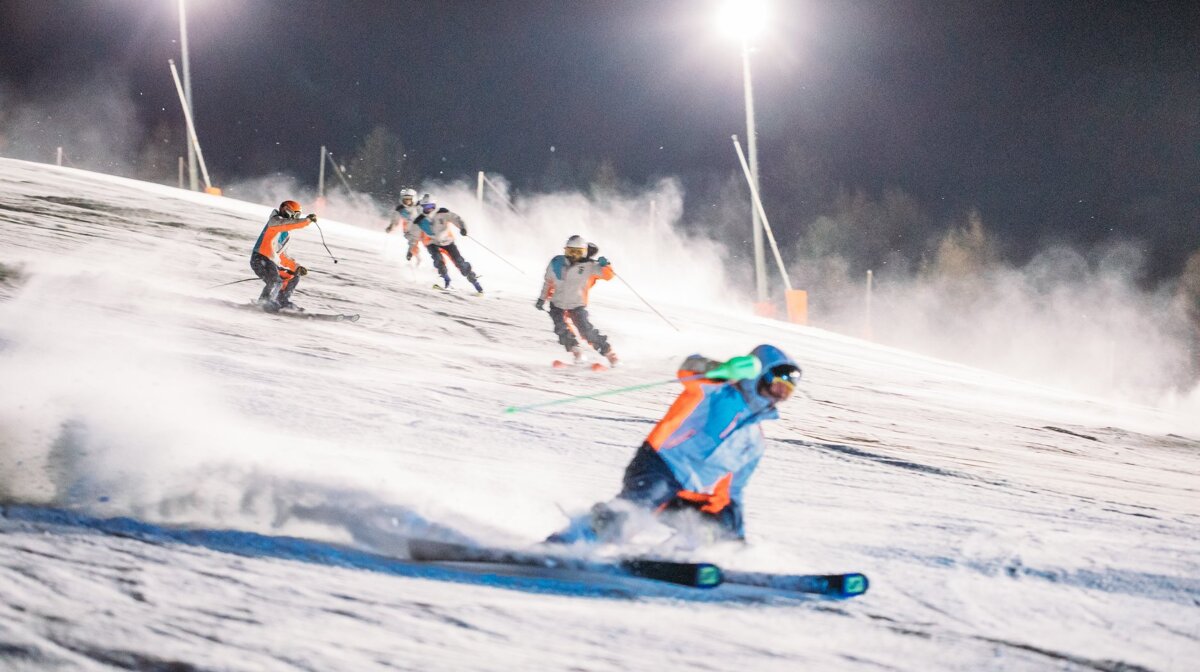 It's the school holidays and the resort is full of families, it's getting a little warmer, the days are a little longer, and the snow is already deep in resort.

With the school holidays in full force, on the slopes and throughout town it's buzzing with activity. La Plagne lays on plenty of entertainment, with regular events and parties going on in the bars, hotels and clubs around town.

Read on for a look at what we like to do in resort throughout February.

What are the weather & snow conditions like in La Plagne in February?

There is still regular snowfall and very much like January the average daily temperatures generally fall between a high of -3ºC and a low of -12ºC, with around just over five hours of sunshine. You can usually expect fairly mixed weather – fresh snow intermingled with often sunny days, but it's still very much a time for wearing a thermal under-layer.

February almost always sees fresh snow – and often in considerable quantities too, averaging 12 days over the month – so it’s a very good time to take a trip out here if you’re looking for that ‘best of both worlds’ scenario. 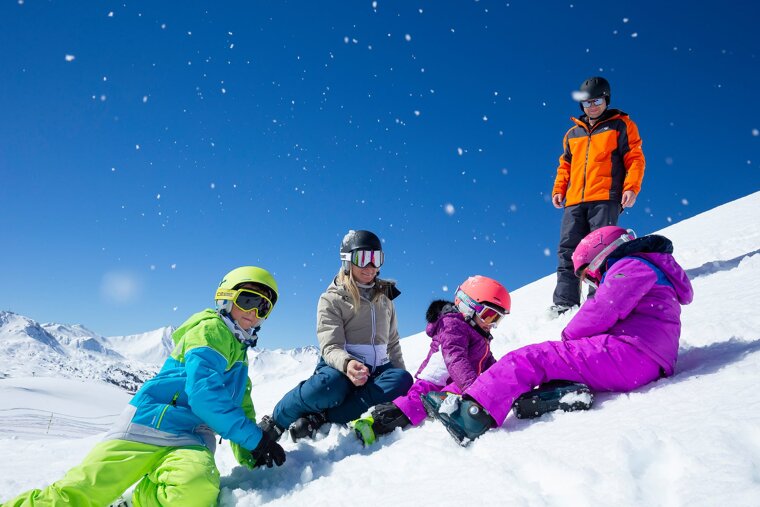 What's on in La Plagne in February?

In terms of activities and events through February, it’s really all about the Born to be Show, however, there are also another couple of things going on.

Born To Be Show
Along with the Super Slalom, the Born To Be Show is probably the biggest annual event in La Plagne’s calendar – a celebration of the resort’s Club des Sports and its athletes (many of whom have medalled at Olympic and world-class level). The show tends to feature ski and snowboard demonstrations by the area’s up-and-coming young sports stars as well as some of its more established competitors. Previous years have seen attendances from Marie Martinod, Brice Roger and snowboard superstar Tess Ledeux (two-time X Games Big Air gold medalist) to name but a few. Appearances are largely dictated by the athletes’ availability so the list varies year to year but you can definitely expect to see some of the bigger names.

There is also a prize draw to win a car, as well as the obligatory fireworks show to close-off the evening. If you’re in resort, it’s well worth attending – though be warned, unless you’re staying directly in Plagne Centre, getting back to the other villages once the show is done can take forever. You’re well-advised to consider leaving as promptly as possible (or early) to avoid delays.

Valentine's Day
For this 14th February, take your pick - La Plagne is full of great gourmet options. If you are after some entertainment while you eat, many places will put on live music, or you could head out after your dinner. Our personal recommendation would be an early Fondue Bourguignonne in the Panoramic Restaurant at Aime 2000, with spectacular views across to a setting sun on Mont Blanc. Alternatively, you could go for a night spent under the stars in the Over the Moon experience – a full evening on the mountain in a luxuriously converted piste-bashing machine complete with panoramic roof window, Jacuzzi, queen-size bed, wi-fi and mini-bar. The slogan, “What happens at 2000m, stays at 2000m” should be more than enough to inspire you.

Grand Bec Nordic Marathon, Champagny
One of the biggest Nordic skiing events of the year is in February in La Plagne. There are different distance race courses to suit everyone ranging from 1.5km up to 42km.  Find out more here and register at the Champagny en Vanoise tourist office.

Rando Challenge de la Plagne
While the predominance of La Plagne’s activities is mostly downhill in nature, there is still a huge cross-country and endurance race following across the area. To cater for these hardy enthusiasts, La Plagne organises the annual Rando Challenge – a series of cross-country endurance events held at various locations throughout the season that will see competitors tackle the climb from village level to the top gondola station – a climb of around 800m – in the dark. We did say, ‘hardy enthusiasts’. Pretty impressive stuff. The event is open to all so, if this is your kind of thing, you’ll find registration details on the homepage of the main La Plagne website. Alternatively, if you’re a more sedate type, you can watch the competitors set off from Champagny village. 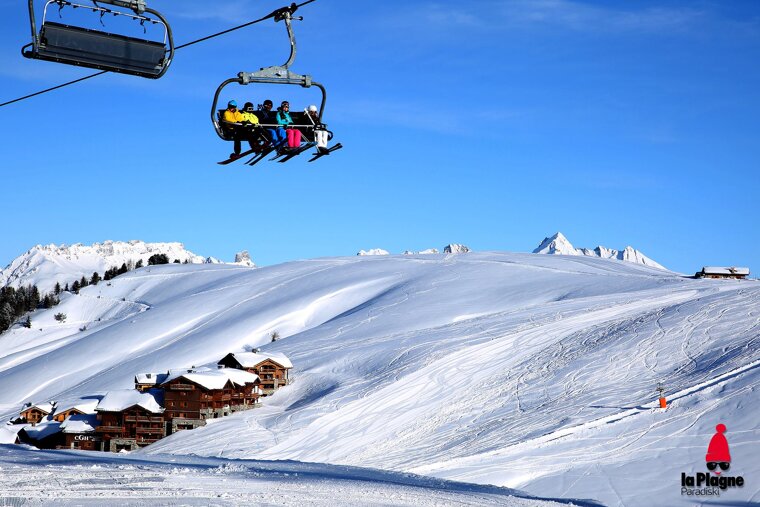 February is a popular month for families so the slopes are noticeably busier as soon as the four-week French holidays begin. With so much of the area open, queues will be less of a problem though you’re still well-advised to get up and out early to avoid the usual bottlenecks. Fortunately, the ski area is so vast, that even in high season you can find quiet slopes and minimal lift queues. Here are our insider's top tips for the school holidays: 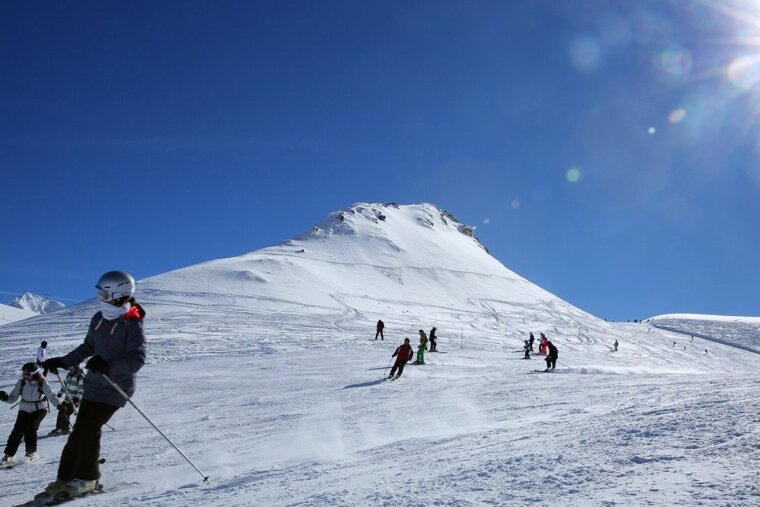 Family fun
February is synonymous with school holidays. As hundreds of children and their families descend on the pistes, La Plagne puts on a show for them. There are lots of activities to keep the little ones entertained on and off the mountain.

Learn to climb some ice
In Champagny le Haut, the ice tower welcomes beginner climbers alongside the sport's elite. The guides will help you and the design means you can make progress quite safely. Contact the tourist office for more information.

Bobsleigh and Skeleton
La Plagne has previously hosted the Bobsleigh and Skeleton World Cup on its La Plagne bobsleigh track. This is the only course in France, built for the Albertville 1992 Olympics and is one of only a handful of officially recognised bobsleigh courses in the world featuring a stomach-churning 19 turns over a total length of 1.5km. The track winds its way down a steep ravine a little below Plagne 1800 to the base at La Roche. If you’re the type that prefers 'to do' rather than to just watch, remember La Plagne offers Bob Raft, Speed Luge and Bob racing experiences, so you can witness the thrill of riding the track first-hand. It’s the closest us mere mortals are ever likely to get to doing these thoroughly exhilarating sports.

Savoyard cheese-making
Most people aren’t aware but, in the summer months, the lower runs of La Plagne are used for farming and the area is renowned for producing some of France’s best-loved and highest-rated cheeses. Learn the skills involved in this ancient art in the traditional village of Montalbert.

Check out our links for more ideas of what to do in La Plagne this February. 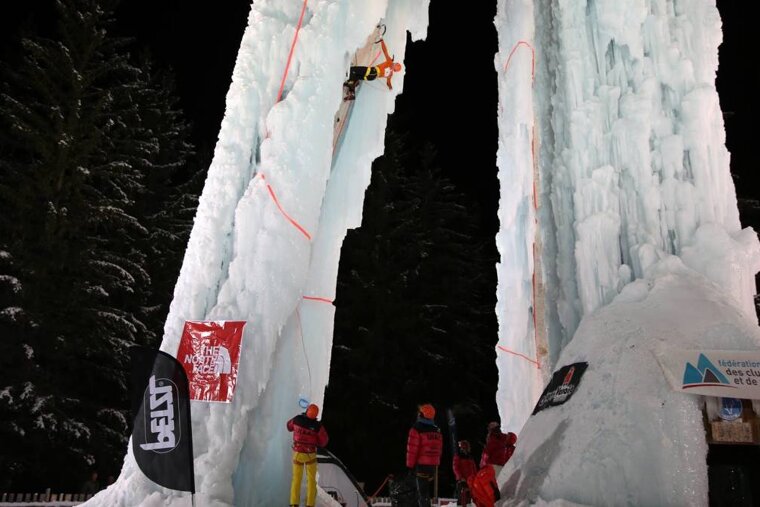 If, like most people, you like to follow several hours of exercise with several hours of drinking, you can hit up any of a number of local après-ski sessions. Down at the bottom of the slopes, you'll find a range of eateries and bars offering great music, delicious food and happy hours.

For late-night entertainment, the clubs hold special nights on most days of the week. 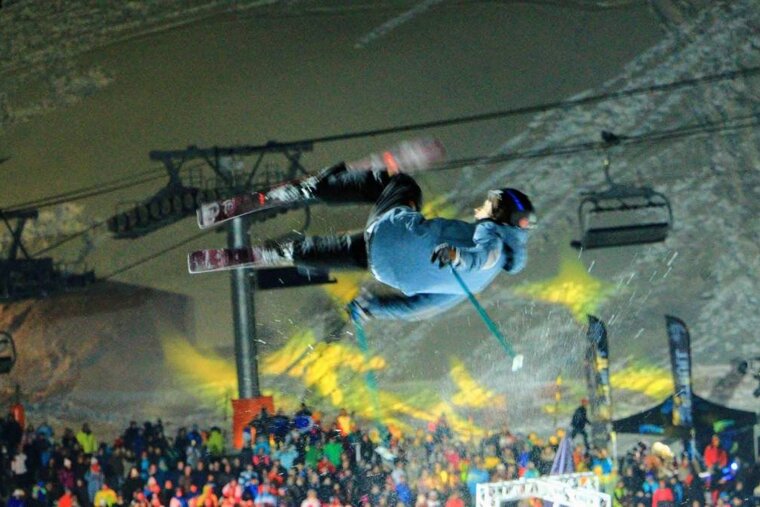 While February is probably the busiest month in La Plagne, there should be more than enough space for everyone. Follow the tips above and you should be able to avoid the worst of the queues and bottlenecks and find yourself riding great snow under often-sunny skies – the perfect mix. Bon ski!

Things To Do in La Plagne