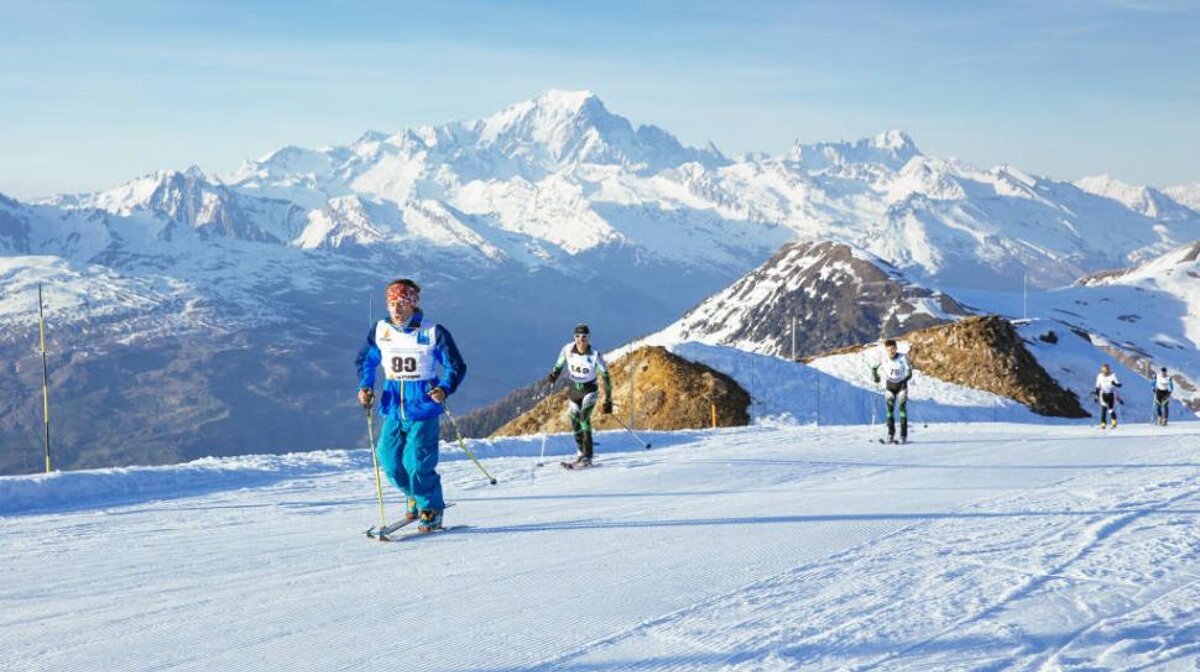 Magical March is here. As we put the madness of the half-term holidays behind us, a chilled party vibe settles on the resort. We enjoy longer, warmer days with some great skiing and long lazy lunches in the sunshine.

With fewer families around, you also tend to find far fewer ski schools on the hill which, of course, also means an end to those long, snaking trails of beginners making their way down. It also makes for much quieter lift lines. So, all in all, an ideal month to visit La Plagne to make the most of the near-perfect conditions.

Read on for a look at what we like to get up to when spring arrives.

What are the weather & snow conditions like in La Plagne in March?

In March the average daytime temperatures generally fall between a high of -1°C and a low of -9ºC, getting around six hours of sunshine. You can be making sunny powder turns one minute then be in the middle of a storm the next.

And, don’t think just because we’re nearing the end of winter that it means the end of the snow. Some of the best falls tend to come through this month. There is on average 11 days snowfall and temperatures still dip well below freezing at night to freshen it up. March riding normally gives us the best of both worlds – regular top-ups interspersed with sunny days. The ideal mix. 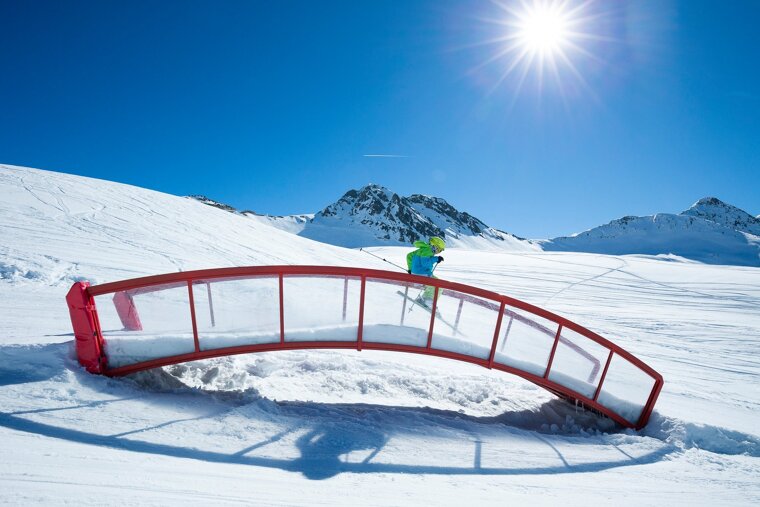 What's on in La Plagne in March?

St. Patrick’s Day
March might be considered the party month here in La Plagne. Longer days and warmer weather make for better après ski, while more adults and fewer children mean bigger nights in the bars. Of course, one of the biggest parties of the season is on 17th March. For St. Patrick’s Day, even the beer turns green as the bars try to outdo each other with Irish themed nights. Expect promotions on Irish drinks, fancy dress and lots of live renditions of the Irish Rover.

Rando Challenge – Les Diables Bleus & Triface
The final two events in La Plagne’s Rando Challenge take place this month and should make for a thrilling conclusion to this four-stage event which starts back in January in Champagny-en-Vanoise.

The first of the two is the Les Diables Bleus and features an uphill battle on two courses rising either 450m or 1,000m up the mountain. This is no ordinary event as, after the gruelling climb, the competitors will also race down a challenging off-piste itinerary to the finishing line. The course follows the old track used by the seventh battalion of the Mountain Infantry – so most definitely a tough event and not one for the faint of heart.

The second which takes place a week later is the Triface event which has both competition and leisure versions and is made up of a sequence of three circuits that correspond to the ascent of three peaks around Plagne Centre: Grande Rochette, Verdons and Bécoin. If you are tired at the end of the first circuit, don't worry: stop and have a hot drink at the base camp in Plagne Centre and you will still be ranked. The more persistent can try to complete the three circuits and be among the finishers.

The overall winner of the five challenges will be crowned later at a prize-giving normally held in Plagne Centre, marking the conclusion of one of the toughest ski touring events in the world. 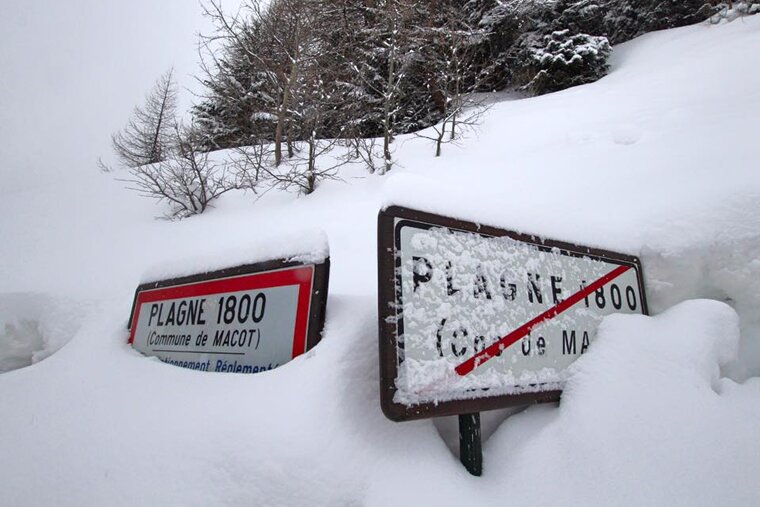 Lessons
Now is a great time to take a private lesson or join a group ski or snowboard lesson, with the quieter slopes there's less queues and the softening snow makes for a much kinder landing.

Learn to climb some ice
In Champagny le Haut, the ice tower welcomes beginner climbers alongside the sport's elite. The guides will help you and the design means you can make progress quite safely. Contact the tourist office for more information.

Ice skating
There are ice rinks at Montchavin-Les Coches, Plagne Centre and Plagne Bellecote - skate hire available at the rink.

Bobsleigh and Skeleton
La Plagne has previously hosted the Bobsleigh and Skeleton World Cup on its La Plagne bobsleigh track. This is the only course in France, built for the Albertville 1992 Olympics and is one of only a handful of officially recognised bobsleigh courses in the world featuring a stomach-churning 19 turns over a total length of 1.5km. The track winds its way down a steep ravine a little below Plagne 1800 to the base at La Roche. If you’re the type that prefers 'to do' rather than to just watch, remember La Plagne offers Bob Raft, Speed Luge and Bob racing experiences, so you can witness the thrill of riding the track first-hand. It’s the closest us mere mortals are ever likely to get to doing these thoroughly exhilarating sports.

Savoyard cheese-making
Most people aren’t aware but, in the summer months, the lower runs of La Plagne are used for farming and the area is renowned for producing some of France’s best-loved and highest-rated cheeses. Learn the skills involved in this ancient art at Restaurant Le Forperet in the traditional village of Montalbert. 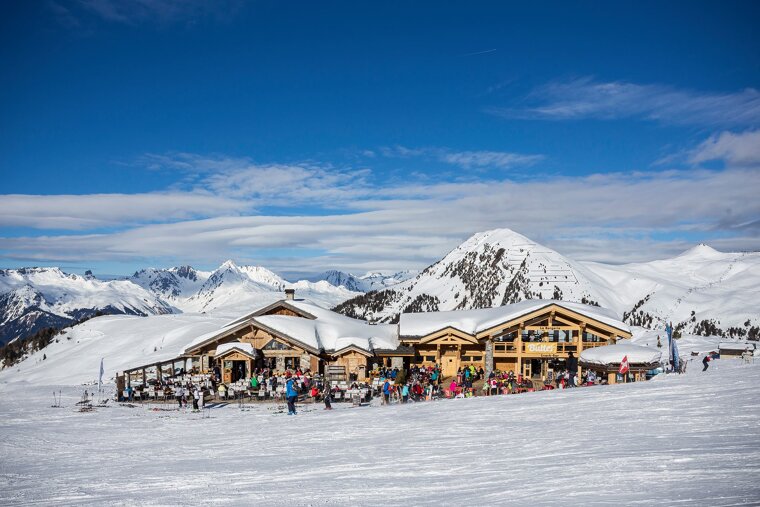 Après ski fun
March tends to attract a younger bunch of visitors to La Plagne so you can expect quite lively nightlife through the coming month. Where once we had families and young kids through February, March normally sees students and more lively, younger types. The bars should be busy this month.

Spitting Feathers in Plagne Bellecôte has a weekly schedule of live music, a quiz night, karaoke – traditionally the busiest and liveliest night of the week in the bar. Be warned, this is a busy night so you’re best getting there early.

La Mine in 1800 also has regular live music and a great atmosphere while the on-hill bar/restaurant La Bergerie has DJs every day. The Igloo Igloo bar in Centre is also highly recommended for live music – and karaoke on some nights. It also has one of the best-priced happy hours in La Plagne.

Or, if you’re looking for another top après haunt, you could do far worse than Le Bonnet, just above Plagne Bellecôte. Being on the hill, this isn’t a late bar, but it does have some of the best après in La Plagne. Definitely recommended. Alternatively, if you’re staying in Belle Plagne, Cheyenne and Bowling bar are probably the best places to be – followed by Saloon if you’re looking for a later night (open til 05:00).

There's a lot more than just skiing or snowboarding in the La Plagne this month! Take a look at our Events Calendar for a full run down and check out all the Things To Do in resort.